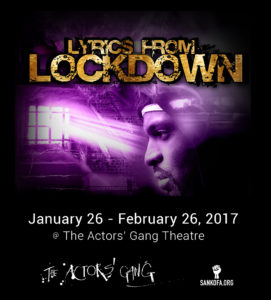 The Actors’ Gang and Sankofa.org present

Culver City, CA, January 6, 2017 – The Actors’ Gang today announced that Lyrics From Lockdown, written and performed by Bryonn Bain and directed by Gina Belafonte will now open on Thursday, February 9, 2017 at 8pm. The groundbreaking multimedia production tells Bryonn Bain’s true story of racial profiling and wrongful incarceration at the hands of New York City police and how this experience led to a transformative friendship with death row inmate Nanon Williams. Lyrics From Lockdown begins previews Thursday, January 26 and opens on Thursday, February 9 and runs thorough Sunday, February 26 as part of The Actors’ Gang Season of Justice at The Actors’ Gang Theatre, 9070 Venice Blvd. in Culver City. Tickets can be purchased online at theactorsgang.com or by phone, 310-838-4264.

“Lyrics From Lockdown is an important and necessary story told with a voice as fresh as today’s headlines,” said Artistic Director Tim Robbins.  “With poetry, musicians and striking visuals, Bryonn Bain and Gina Belafonte give us a first hand look into racial profiling and a deeply flawed criminal justice system in a powerful evening of theater.”

Under the direction of Gina Belafonte, Lyrics From Lockdown weaves the voices of over 40 characters into an extraordinary, internationally acclaimed tour de force.

This one man multimedia production features a live band and VJ and a fusion of hip hop, theater, spoken word, rhythm and blues, calypso and classical music, to tell Bain’s story.

After being unjustly stopped and frisked outside of a NYC nightclub, the back then Harvard Law School student was thrown into jail. Once released, Bain recalls writing poetry, rhymes, and what later became a cover story for the Village Voice. His story, “Walking While Black,” received the largest response in the history of the nation’s most widely-read progressive newspaper.  Soon after, Bain’s law school professor Lani Guinier suggested that he create a “hip hop opera.” From there “Lyrics From Lockdown” was born.

The play also introduces the audience to Nanon Williams, a young man who was sentenced to death at age 17 for a crime he did not commit. Nanon wrote Bain from Death Row after reading his story nearly a decade ago. “His letters changed my life,” Bain said. “He asked me to share his story and I was so moved by it that I weaved his letters into Lyrics so you see how this young poet — unjustly robbed of his youth — is inspiring a global movement to free himself and others unjustly thrown into prison.”

“Art and culture are creative tools to educate, organize and mobilize a movement. The criminal justice system has hit pandemic proportions and our level of engagement as a community is vital to bring solution and alternatives to this crisis,” director Gina Belafonte said. “Bryonn Bain’s Lyrics From Lockdown is an exemplary offering of the engagement of arts in activism and a vision of an equitable and transformative world.”

Bain is Brooklyn’s own prison activist, actor, hip-hop theater innovator and spoken word poetry champion. Described by Cornel West as an artist who “…speaks his truth with a power we desperately need to hear,” Bain’s work as a BET host won awards for the critically acclaimed talk show “My Two Cents.” Bain’s second book, The Ugly Side of Beautiful: Rethinking Race and Prisons in America will be published this fall by Third World Press with a foreword by Mumia Abu Jamal and introduction by Lani Guinier. Currently teaching in the Dramatic Arts at Harvard, Bain has taught courses on hip hop, spoken word and the prison crisis at Boys Town Detention Center, Rikers Island prison, NYU, LIU, Columbia University and The New School. Lyrics From Lockdown has sold out on three continents worldwide. Bryonn joined the Board of Directors at the Correctional Association in June of 2012.

Gina was born and raised in New York City and has spent her life in the arenas of entertainment and activism where her professional work thrives today. As the youngest child of Julie and Harry Belafonte, whose impact in these fields is among the most influential and progressive in the world, Gina’s passions come as no surprise. Gina was the lead producer on the internationally acclaimed documentary film, “Sing Your Song,” exploring the extraordinary life and legacy of her father, Harry Belafonte that was selected as the opening film for the Sundance Film Festival in 2011. Gina currently sits on the boards of 2nd Call and The Actor’s Gang and is now the Co-Director of Sankofa.org a social justice organization that enlists the support of today’s most celebrated artists and influential individuals in collaboration with grassroots partners to elevate the voices of the disenfranchised and promote peace and equality.

Sankofa.org is a social justice organization founded by Harry Belafonte that enlists the support of today’s most celebrated artists and influential individuals in collaboration with grassroots partners to elevate the voices of the disenfranchised, and to promote peace and equality. Sankofa.org focuses on issues of injustice that disproportionately affect the disenfranchised, the oppressed, and the underserved, which left unaddressed will continue to impact the lives of too many individuals and remain a scar on our nation’s moral character.  Some of the key issues we are currently addressing include: the systemic violence that has poisoned our society and is being reinforced by legislation such as Stand Your Ground, rampant over-incarceration rates including the cradle-to-prison pipeline and an unequal justice system; income disparity, where wealth is concentrated at the top and the earnings gap between has only grown more pronounced since the 1960’s.

( Executive Producer). This production was developed in workshop by Urban Stages (NY), Climate Theatre (SF), Blackout Arts Collective and with Mei Ann Teo and was originally produced at the National Black Theatre by Harry and Gina Belafonte.

ABOUT THE ACTORS’ GANG

Since 1981, The Actors’ Gang has created and presented over 150 bold, original works and reinterpretations of the classics to address society and the human condition from an uncompromising and fresh perspective. Over the past 35 years, The Actors’ Gang has brought its unique style of theater to audiences throughout the world and performed on five continents and in 45 U.S. States.

Our groundbreaking “Prison Project” has expanded to eight California prisons serving incarcerated women, men and children with rehabilitation programs that reduce tensions in prisons and significantly reduce the recidivism rate.

Hundreds of children in Los Angeles public schools discover confidence and creativity with our Education Department’s in school immersion and after school programs. Our classes encourage acceptance, respect and team building in a fun and effective way. For more information, please visit us in our theatre or online at  www.theactorsgang.com

General tickets are available for $34,99. Seniors and students may purchase $30.00 tickets. Thursday evenings are “Pay-What-You-Can.” For tickets, please call 310-838-4264 or visit www.theactorsgang.com to purchase tickets online or to view the complete schedule.  The Actors’ Gang Theatre is located at 9070 Venice Blvd, Culver City, CA, 90232.