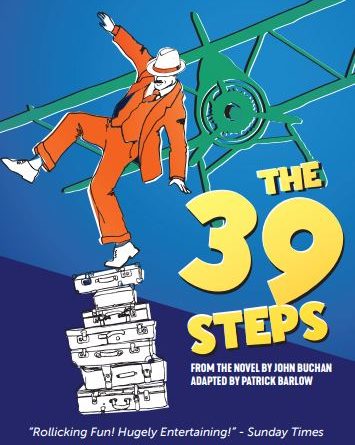 ICT brings murder, mayhem and mirth to the Long
Beach Performing Arts Center with ‘The 39 Steps’

LONG BEACH, Calif. (May 22, 2018) — Hitchcock meets hilarious in a fast-paced comedy mystery thriller for anyone who loves the magic of theater. International City Theatre presents The 39 Steps, adapted by Patrick Barlow from the novel by John Buchan and based on the Alfred Hitchcock movie. Jamie Torcellini directs for a June 22 opening at International City Theatre in the Long Beach Performing Arts Center, with two low-priced previews set for June 20 and June 21.

“It’s bonkers to try to recreate an ambitious action movie frame-by-frame with only four actors on stage,” said Edward Snape, producer of the West End production.

“When I first met Edward, our head honcho producer, it was with the idea of adapting John Buchan’s book, which of course is one of the first great thrillers,” said Barlow in an interview. “It is very elegant and charming and even for its time quite suspenseful, but still rather staid. It is more like a meditation on a man alone searching for the truth. Not exactly nail-biting, which is what one needs. So at first I couldn’t really find a way in. Till I bought the VHS of the Hitchcock film for £2.99 and there was the answer ready-made. “

The result: a fast-paced whodunit packed with nonstop laughs that The New York Times calls “Theater at its finest… absurdly enjoyable.”

The 39 Steps runs Thursdays, Fridays and Saturdays at 8 p.m. and Sundays at 2 p.m., June 22 through July 8. Two preview performances take place on Wednesday, June 20 and Thursday, June 21, both at 8 p.m. Tickets are $47 on Thursdays and Fridays, and $49 on Saturdays and Sundays, except for Oct. 20 (opening night) for which tickets are $55 and include a post-performance reception with the actors. Low-priced tickets to previews are $35.

International City Theatre is located in the Long Beach Performing Arts Center at 330 East Seaside Way in Long Beach, CA 90802. For reservations and information, call 562-436-4610 or go to InternationalCityTheatre.org.

Details for Calendar Listings
‘The 39 Steps’

WHAT:
The 39 Steps — Hitchcock meets hilarious in this fast-paced comedy mystery thriller for anyone who loves the magic of theater. Train chases, plummeting planes and old-fashioned romance lead to a death-defying finale as a cast of four actors breathlessly reenacts hundreds of characters, locations and famous scenes from Alfred Hitchcock’s 1935 film of the same name. Winner of the 2007 Olivier Award for Best New Comedy and the 2008 Drama Desk Award for Unique Theatrical Experience.