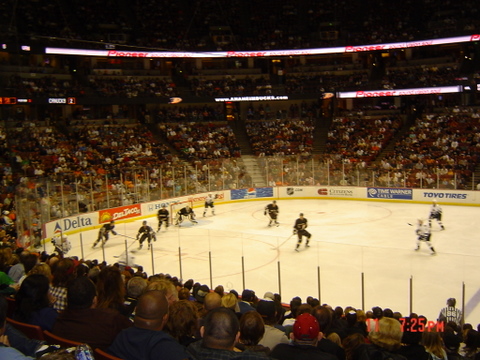 The Anaheim Ducks faced off with the Vancouver Canucks on March 11, 2007. Both teams are on their way to the playoffs but trying to capture the highest seeds they can. The Ducks prevailed 4-2 in this very physical and tense game. Teemu Selanne started off the scoring in the first period. He notched his 40th goal of the season and is the first player in NHL history age 35 or older to record consecutive 40+ goal seasons. Andy McDonald scored two goals within a minute and 2 seconds of each other in the first period to give the Ducks control of the game. The Canucks who are first in the North/West Division could never catch up. Duck’s head coach Randy Carlyle utilized smart strategy for this game and has done an outstanding job this season as his team leads the Pacific Division. They have been beset by injuries to key players but have overcome it all to be one of the best teams in the league this year. The goal tending combination of Ilya Bryzgalov and Jean-Sebastien Giguere has been very effective. Giguere has had his best season since the Ducks last made it to the Stanley Cup finals a few years back. His record is 32-8-7 with a goals against average of 2.21. A steady combination of scoring from Selanne, McDonald, Ryan Getzlaf, Chris Kunitz, Dustin Penner and Corey Perry has been productive this season. Key free agent signee Chris Pronger and Scott Niedermayer have solidified the defense while both having over 50 points each. The team is well rounded and one of the favorites as the playoffs approach. The Canucks are also a team to be reckoned with led by Markus Naslund, the Sedin twins and new goaltender Roberto Luongo also having a fantastic season with a 39-19-4 record and 2.32 goals against average. Luongo was out played by Giguere in this matchup. 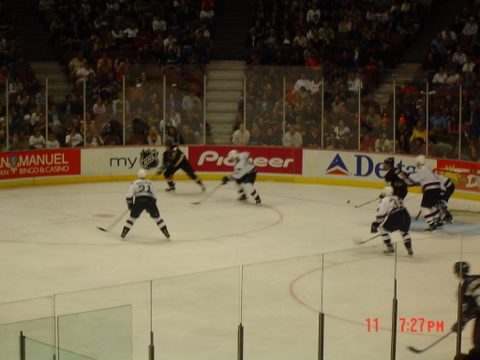 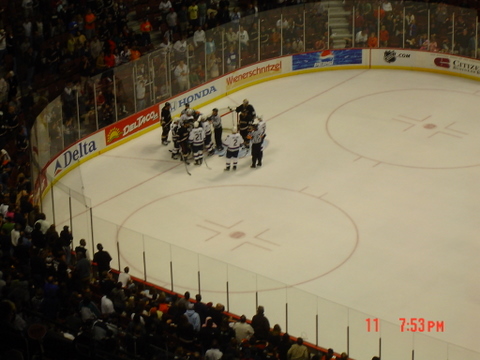 For more information and to buy tickets call (877) WILDWING or visit their website www.anaheimducks.com/index.php