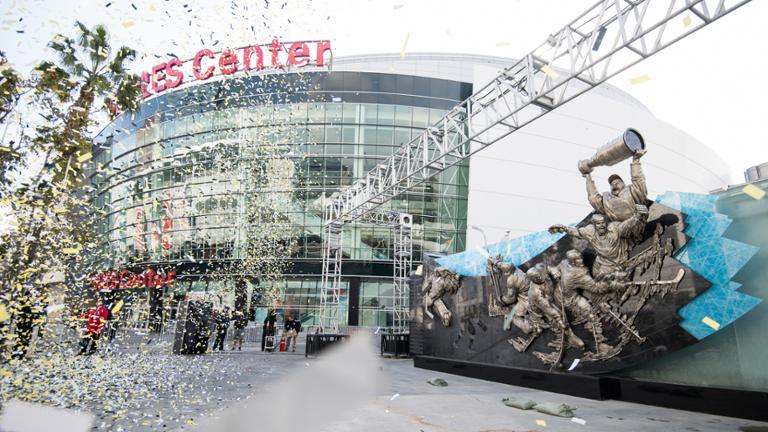 The LA Kings took on the Western Conference leading Chicago Blackhawks (14-6-3 after this game) before a sellout crowd at the Staples Center on Thanksgiving weekend. This game also introduced the 50th anniversary and unveiling of a plaque outside which took over 2 years to make. It includes Jonathan Quick, Marcel Dionne, Dave Taylor, Rob Blake, Anze Kopitar and Dustin Brown lifting the Stanley Cup. Former King Larry Robinson was honored before the game.

This was a tough battle between two of the more consistent teams that last 6 yrs. Before the Penguins won the Stanley Cup last year, the Kings and Blackhawks traded winning the last 5 Cups with Chicago winning 3 and LA 2 of them. The game was close the whole way but Jeff Carter scored the game winner in OT for a 2-1 win. Chicago was finishing a 9 day road trip playing 6 games in that time as well as a back to back defeating the Ducks the night before. The Blackhawks were also playing without their captain Jonathan Toews but still had reigning MVP Patrick Kane.

The Kings thought they had an early lead when Tyler Toffoli scored a few minutes in only to have it reversed on goalie interference by Tanner Pearson. Coach Sutter disagreed with the call even though Chicago won the challenge after the reply. Kane started the scoring tipping a shot past Peter Budja. However, that was it for Chicago as Budaj stoned them all night making fabulous point blank saves (including two of them on forward Rasmussen) while playing in his 20th straight game (A King’s record). He also lowered his 2.1 goals against average and has been a superb savior while starting goalie Quick heals from an injury. Alec Martinez wrist shot tied the score 1-1 in the second period. The score stayed that way till overtime. The Kings actually had a power play with one minute left in the game that extended into overtime. Just when their power play expired, red hot Jeff Carter got the puck and put one of his incredible high shots past Scott Darling for the game winner and final score of 2-1. That was his 5th goal in 5 games.

The season has been up and down so far with some winning and losing streaks for Los Angeles. Their record improved to 12-9-1 including 9-2 at home. They did get Marian Gaborik back for his first game this season since he broke his leg in the World Championships.

After the game, here are some of the interviews

Budaj- “We have to stay even keel as it is a long season and stay positive. Even though they were missing Toews, they are still very tough. We did a great job on the penalty kill. I feel good and healthy”.  I asked him what the key was as he seemed like he was one step ahead on the odd man rushes and shots and he replied “ I was seeing the puck well even though we had outshot them 15-1 but down 1-0. They don’t like to shoot too much. They try to make plays but our team helped out with that and we have good chemistry with that. It is Quick’s team and we work hard in practice. We try not to get too high or low and stay on top of the game while being confident and play our game”.

Pearson- “It was a tough game but we battled back and got that extra point.  Jeff Carter has his mojo and he is rolling right now. Budaj is calm back there. He did his job”.

Chicago Coach Joel Quenneville- “ We did some good things tonight. We played it tight and close and had to kill a penalty late in the game. The guy (Carter) made a great shot. Darling is big in the net and he made some great saves. It gives us a chance to win and get points We can be better with the puck. We said .500 would be a good road trip. We started poorly but winning 3 of the last 4 was good. We have been getting better defensively. We are still getting familiar with some guys here. We looked at the first goal to give it a shot for the challenge of goalie interference”.

I asked him if the back to back made any difference. He replied, “ We played 6 in 9 nights. We were missing our key guy Toews in key situations. The guys hung in there and did what they needed to do”.