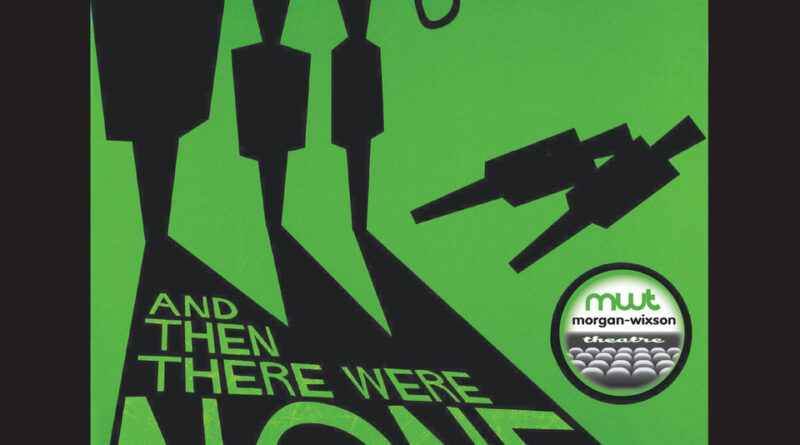 the fourth show of its 72nd Mainstage season,

the classic whodunit from the Queen of Crime

And Then There Were None

Santa Monica, CA—The Morgan-Wixson Mainstage presents its third show of 2019, And Then There Were None. Directed by Michael Thomas-Visgar and produced by Larry Gesling, this classic whodunnit runs May 4 through May 26.

Critics, reviewers, and press are invited to the opening night gala following the May 4th show.

Ten strangers are summoned to a remote island. All that the guests have in common is a wicked past they’re unwilling to reveal and a secret that will seal their fate. As the weather turns and the group is cut off from the mainland, the bloodbath begins and one by one they are brutally murdered in accordance with the lines of a sinister nursery rhyme.

They all claim their innocence but yet they are all suspects. Who is the killer? Who will survive? The tension escalates as the survivors realize that the assassin is not only among them but is preparing to strike again.

Considered to be Christie’s masterpiece, And Then There Were None – originally published in 1939 – is also her most successful book and one of the best-selling novels of all time. In 1943, Christie wrote the stage version. Responding to the mood of the times during the height of World War II, she changed the ending, making it more positive and upbeat. The play was a smash hit in the West End in London and later on Broadway. Critics have praised the story’s intricate plotting and innovative technique and many consider And Then There Were None to be one of the best mysteries ever written.

Director Michael Thomas-Visgar, who helmed the riotous farce Moon Over Buffalo last season, returns to the Morgan-Wixson to take on Christie’s most famous work. “There are no horror plays that are as thrilling or exciting as this one. And even if you’ve seen any of the filmed versions, seeing our production will feel like experiencing it for the first time.” Michael and the design team are creating a completely unique experience: the set is designed to make the audience feel like they are trapped inside the walls of the house. This will give the sense of anxiety that the characters are actually feeling. There are no full walls so the audience can see the characters offstage, getting a view of what they are doing and thinking behind the scenes.

Michael says, “Rarely are there plays that will set you on the edge of your seat. And the way we are doing it, there are so many thrills to be had watching this production. The build-up to the twists within the play will make the audience gasp.”

Aric Martin plays William Henry Blore. He was last seen on the Morgan-Wixson stage in She Loves Me and behind the scenes as director of The 39 Steps. After appearing in so many MWT musicals, Aric jumped at the chance to do an Agatha Christie play. He really enjoys the show’s setting in a single location and getting the chance to play in the sandbox with the other actors. “It’s like a chess game: sensing everyone’s energy and motives, figuring out how to outsmart each other. Performing in a thriller is so fun because it’s exciting to play the high-stakes element that is essential to this genre. It’s a joy to create mystery—we have been having a great time!”

And Then There Were None

Age recommendation: Recommended for ages 12 and up.

Audience Talkbacks scheduled for May 10 and May 19, immediately following the performances.

Santa Monica’s Morgan-Wixson Theatre is the oldest theatrical organization in the city, founded in 1946. Originally known as Santa Monica Theatre Guild, its first home was the Miles Playhouse. In 1950, the group moved to an abandoned naval facility at 5th Street and Ocean Park Boulevard, near what is now the Muir/SMASH school site. Community members converted the building to the Ranch Playhouse, later renamed the Morgan Theatre in honor of prominent Santa Monican Geoffrey Morgan, who had helped to secure the site. For many years the Morgan Theatre was the center of live theatre in Santa Monica, until 1962 when a fire destroyed the building. Fortunately, the organization had been thrifty over the years and was able to purchase land on Pico Boulevard. In 1966, the group built the building you are in today, using mostly volunteer labor. Since 1979, it has been known as the Morgan-Wixson Theatre, after the death of dedicated member Mel Wixson, who passed away shortly after performing on the Morgan stage.

1947 saw a very young James Dean onstage in The Romance of Scarlet Gulch. Harvey Korman appeared as Hamlet in 1955. Our revival of the play Green Grow the Lilacs, the basis for Oklahoma!, featured music composed by a young Rod McKuen. Joyce DeWitt was “discovered” and cast in Three’s Company when she starred in Sweet Charity. David Mamet conducted rehearsals for the world premiere of his play Doctor Faustus and children’s musician Dan Crow recorded his live album ‘Oops!’ at our facility. Beanie Feldstein (Hello, Dolly!, Lady Bird) appeared in several youth productions including the title role in Thoroughly Modern Millie.

The MWT is a busy enterprise structured around a diverse annual season of Mainstage plays and musicals for general audiences. Recent Mainstage productions have included the plays Moon Over Buffalo, Boeing Boeing, The 39 Steps, and The Foreigner and musicals including Legally Blonde, Peter And The Starcatcher, The Addams Family, All Shook Up, Seussical the Musical, [title of show], Mary Poppins, Little Women, She Loves Me, and Little Shop of Horrors.

Our Youth Education/Entertainment Series (Y.E.S.) strives to engage young audiences and train young talent. Y.E.S. was selected as Outstanding New Children’s Theatre Company in the nation in 2008 by the American Alliance for Theatre and Education. Y.E.S. productions are based on children’s literature, such as Eleanor Estes’ The Hundred Dresses, Barbara Parks’ Junie B. Jones, E.B. White’s Charlotte’s Web, The Velveteen Rabbit, Curious George, Winnie the Pooh, and James and the Giant Peach. Y.E.S. hosts field trips so that local schoolchildren can see a live play in a real theatre, often for the first time, based on books they read. Y.E.S. presents an annual Youth Musical in the fall which has featured favorites like White Christmas, Shrek, Beauty and the Beast, A Winter’s Tale, and this season’s 42nd Street. The building is also the home of long-time tenant Kids on Stage which offers creative dramatics classes for youth.

Auditions for all our productions are open to all. Youth participating in Y.E.S. productions are selected by audition and are not charged fees or tuition. Likewise students are trained in stagecraft, lighting, and sound without tuition and may select MWT for their community service hours. Both Mainstage and Y.E.S. shows feature post-performance discussions with actors, directors, and designers.

The Morgan-Wixson Theatre is a 200-seat non-Equity house, operated as a place where talent can train, theatrical passions can be sustained, and the community can be engaged in live theatre that entertains, enriches, and educates.

In 2017, the MWT embarked on an ambitious plan to renovate the building, grounds, auditorium, stage, and equipment. The first phase, replacing the seats and improving the lighting and back wall of the house, was funded entirely by donations and took place at the end of 2018. We are currently raising funds to improve our lighting and sound systems. Improvements are planned for the lobby area and restrooms. For more information and to donate to the campaign, please visit the MWT website.