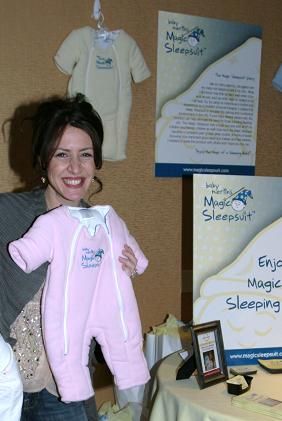 “All I can say is “What a Event!”.  All the vendors were extremely generous and friendly.   Many celebrities and media attended to make this baby gifting suite an incredible 2 day event leading up to the Golden Globes on January 11th.   Going from room to room at the Century Plaza Mezzanine level and 5th floor was quite the adventure.  I mean that in a good way as we would meet vendors from all over the country showing and providing us their latest products and services.  This was a true wonderland for expecting mothers or families that are new parents.  What Fabulous ideas and companies. We would like to thank many of them below with certain features to come.”

Special Thanks to Mikey and Melissa for their Fantastic job with the PR and the event. They are a top notch organization that I would highly recommend in the future. More at www.thechimp.net  or email is mikey@thechimp.net

127 Pregnant and Famous Families Turn Out for

Day 2 Photos of Celebrities with their kids: Jodie Sweetin, Chris Noth, Kelly Rutherford, and others from Saturday posting overnight:

Wireimage: posting by Sunday am

Startracks Photo: posting by Sunday am

Celebrity Photo: posting by Sunday am

NEWS, ITEMS and PHOTOS from Day 2:

Jodie Sweetin attended with her baby girl Zoie (9 months), and her own mother Janice in tow. A milestone was reached in the BBR that caused Jodie great joy – baby Zoie waved for the first time as she was carried out over her mom’s shoulder, waving goodbye to a sponsor. Jodie picked up 4 pairs of Robeez’s shoes, and tried them on Zoie lamenting that “putting shoes on a baby is like putting shoes on a Barbie…impossible.”  Many celebrity guests commented on how skinny Sweetin looked. Sweetin told them that she “changed the way she ate, lost a lot of weight using Nutrisystem,  and that (she’s) cut out all junk food” from her life.  She mentioned planning a birthday party next week with friends (Jan 19) but didn’t have plans yet as she was trying to come up with something to do with her sober friends. She made several comments throughout the day that she was very happy, content, and feeling positive about 2009.

Chris Noth and girlfriend Tara focused only on educational items for their son, Orion (1 year). They sought out the “Baby Can Read” line of books. In true Hollywood style, they made a deal on site. They contracted with the book’s author to teach their nanny how to teach how their baby to use the line of books. They did indulge in a monogrammed cape with a big “O” on the back for Orion.

Gossip Girl’s Kelley Rutherford, suddenly solo, came with son Hermes. She told a friend she hadn’t decided on a nursery until she saw celeb fave Bratt Décor, that had set up a model bedroom. Meanwhile son Hermes headed for the all you can eat Baskin Robbins Sundae Bar.

Jeri Ryan welled up with tears of emotion at two points during her visit to Jayneoni Moore’s Boom Boom Room. Impressed by the unique children’s personalize-it-yourself book “Daddy Loves Me” she said she “adored” the book and had to wipe tears away while reading the author’s original version made for her children.

CBS’ pregnant “Worst Week” star Erinn Hayes attended with what was described by baby product companies as “the perfect baby bump”.  Hayes responded to every compliment with a joking “I’m not pregnant, I am just really letting myself go.” She fell in love with Migi Bedding, whose reps gifted her the entire pinwheel bed set.

Christian Bale’s wife Sibi Bale visited the Lego Playland asking for 2 packages of take hom Legos– “one for a four year old, and one for a 35 year old. Christian is a huge fan and will play with these all day, “ she said.

There appreared to be some disagreement about the future of the Baio family. When asked about adding another kid, Scott Baio says “I don’t want another” at the same time wife Rene said “I do”.

CBS’ “Numb3rs” castmates Dylan Bruno and Alimi Ballard met up to reap the rewards of celebrity fatherhood together at the Boom Boom Room.

Oakland Raiders star Darren McFadden snuck in to the Boom Boom Room to collect gifts for his sons after shooting a Superbowl Commercial for the NFL in the same hotel.

Day 1 –  Photos of Celebrities with their kids:

Especially Rachel Zinny and Christina B. – thanks for taking such an interest

More thanks to some fabulous vendors that donated

www.boobdesign.com for some great maternity clothes they brought and donated

In September 2008, the Baby Merlin Company launched the sale of the Magic Sleepsuit through the Company web site www.magicsleepsuit.com.  After years of research, design, and testing, the Magic Sleepsuit is finally available to help parents and caregivers prolong the quality and duration of their babies sleep.

Uwchland, PA September 1, 2008 – Maureen Howard, a mother of three, a pediatric physical therapist, and creator of the patent pending Magic Sleepsuit has launched the Company web site www.magicsleepsuit.com.  As Maureen explains, “It was with my first child, who was a good sleeper as a newborn then started having poor sleep patterns at about 3 months of age, that I experimented with ways to prolong the quality and duration of his sleep”.  She tried a sleep sack, which helped to keep her baby warm, but did not provide the secure, contained feeling that her baby needed to help him go to sleep on his own or fall back asleep if woken.  She observed that her baby slept best when he was cozy and secure, such as when he was in a car seat or stroller, or when he was being held.  So, Maureen decided to create a product that would simulate these environments in the crib.

With Maureen’s background as a pediatric physical therapist she knew, physiologically, that the Magic Sleepsuit made sense.  As a mom, all she knew was that it helped her baby sleep better and longer and also provided Maureen and her husband with the rest she needed.

Maureen also points out that even if a baby sleeps well, the Magic Sleepsuit is a great product that eliminates the need for blankets in the crib and the need to layer the baby in multiple layers of clothing to keep them warm.  The American Academy of Pediatrics and SIDS Alliance/First Candle recommend that no blankets be in the crib with a baby when they are sleeping.  Not only does her product eliminate the need for blankets, it also helps keep the baby on their back longer, the preferred sleep position to prevent SIDS.  All of the features and benefits of the Magic Sleepsuit can be found on the Company web site www.magicsleepsuit.com.

The Magic Sleepsuit is currently available in three colors (pink, blue, and yellow) and two sizes (small and large).  The Magic Sleepsuit has a cozy micro fleece outer layer, a soft cotton inner layer against the baby’s skin, and a layer of poly-fil in between for just enough warmth and comfort.  The small size was designed for babies approximately 3 to 6 months of age and 12-18 lbs and the large is designed for babies approximately 6-9 months and 18-21 lbs.

For additional information about the Feature Mom story, please contact Maureen Howard at maureen@magicsleepsuit.com or 610-458-0130.

CELEBRITIES WHO ATTENDED ON FRIDAY (Day 1):

NEWS, ITEMS and PHOTOS from Day 1:

Who was Kathy Hilton Shopping for?

Right after having a very public lunch with Paris at the Ivy, Kathy Hilton came right to the Boom Boom Room – the premiere destination for expecting Hollywood celebrities. Paris and Nicky’s mom Kathy Hilton showed up by herself and consciously wanted the paparazzi not to see “Paris’ mom” loading a ton of baby products in to her car. Her enthusiastic participation in the event was mixed with weird, conflicting, and confusing comments from her about who and what exactly she was shopping for.

At different points Kathy asked her host to direct her towards newborn items related to “both boy and girl stuff”, and later “twins”, and said she was shopping for her sister. Later Kathy told a sponsor she was shopping for her “sister-in-law”.  While her appearance provoked guest speculation in the room about which of her daughters she might be picking up items for, Kathy took steps to avoid photographers outside saying she didn’t want the paparazzi to think that “Paris’ mom” was picking up baby products like Born Free Baby Bottles for her.  Many peer celebrity guests in attendance concluded Kathy truly had something to hide. With a serious boyfriend, many thought Nicky Hilton could be the pregnant daughter despite Paris’ frequent statements that she wants to have lots of kids and that she had just come from a mom-daughter lunch with Paris. (Photos Available on Wireimage, CelebrityPhotos, StarTracksPhoto.com)

Californication’s Evan Handler and wife Elisa came to pick up parenting items for his buddy (and fellow Sex and the City alum) David Eigenberg , (Miranda’s Steve) who is about to have a baby himself. (Photos Available on Wireimage, CelebrityPhotos, StarTracksPhoto.com)

Nip/Tuck’s Anne Heche and partner James Tupper made their first “pre-baby” public appearance to make a generous donation to the Jayneoni Moore Children’s Fund in appreciation for all of the elite parenting items gifted to them at the Celebrity Parent’s Boom Boom Room. (Photos Available on Wireimage, CelebrityPhotos, StarTracksPhoto.com)

Holly Robinson Peete greeted “The Starter Wife’s” James Black with a big hug when the two celebrity parenting friends reunited at Jayneoni Moore’s Celebrity Parenting event on January 9. Moments later Black dropped to his knees in appreciation for a new Chicco stroller. He immediately ripped open the box and put it together right in their suite to roll it out. (Photos Available on Wireimage, CelebrityPhotos, StarTracksPhoto.com)

Pregnant Grey’s Anatomy’s star Chyler Leigh earned compliments bordering on playful jealous from several peer celebrity moms at the Boom Boom Room for being “so skinny”. She admitted the show’s producers hid her pregnancy for months and then decided to cover it up in the show’s plot entirely. Her husband told a guest, “she spends $5,000 a month on special foods to stay in shape.” (Photos Available on Wireimage, CelebrityPhotos, StarTracksPhoto.com)