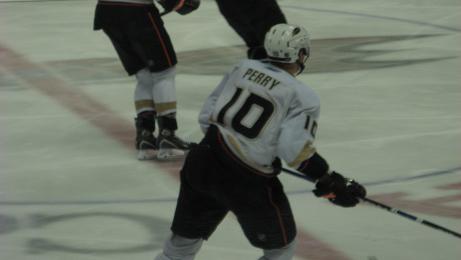 After a fantastic game the night before in San Jose as the Ducks manhandled the Sharks 5-2, it was time for another barnburner back in Anaheim the next night at the Honda Center. The Anaheim Ducks played a great game April 5, 2009 at the 5pm early start time against the San Jose Sharks.

Despite the 3-2 loss, the Ducks knew there was a lot to play for with only 3 games left in the season. Anaheim came out scoring in the first period when newcomer Petteri Nokelainen wristed a goal in the first period past the Sharks goalie Brian Boucher. Then, Sharks Jeremy Roenick shot a 1-timer from the slot to tie the game 1-1 early in the second period. Corey Perry put the Ducks ahead again for the last time 2-1 scoring after taking a deflected pass from Teemu Selanne. The Sharks quickly tied the game 2-2 as Joe Pavelski scored right in front beating Jonas Hiller. Jonathan Cheechoo scored the last goal on a power play as the Sharks took the lead 3-2.  Top player Ryan Getzlaf was relatively quiet with one assist after a 4 assist dominating game the night before.Crowd favorite George Parros leveled Shark left wing Jody Shelley in the second period and Shelley soon retaliated drawing a penalty (the last one the Ducks would see) 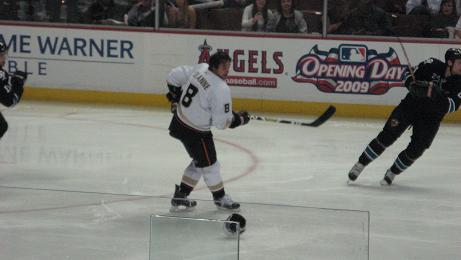 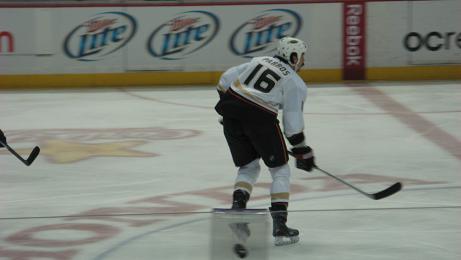 It was a sell out crowd and the audience stayed right until the end, when there was full out brawl six-on-six after the horn sounded. There was a lot of hustle and good play by both sides confused by arguable amounts of penalties against the Ducks. There was a ‘ref you stink’ chant within the last 5 minutes of the game by the rowdy audience. At the horn both teams had after one another, bottles were thrown onto the ice and the crowd was not happy. For the rather tame Anaheim fans, they were not very pleased with the officiating as it was completely one sided especially after the midway part of the second period through the rest of the game. Many questionable penalties were handed out by referees Dan O’ Rourke and especially Chriss Lee  (pictured below)

In such a tight, close game, the refs shouldn’t get that involved as they take the game away from the players. I have covered hockey many years now and cannot remember a game being so poorly handled by the refs. The last 5 penalties were called against the Ducks with only Chris Pronger’s delay of game call for flipping the puck over the glass being very valid. The least the refs could have done was call it close both ways if they were going to nitpick calls mostly around center ice.  The team remained upbeat yet disappointed after the game.  They still had their chances but were not happy about the refs especially coach Randy Carlye who said it is tough enough to beat the Sharks who are the #1 team with points this year in the NHL and being shorthanded so much was very tough to overcome. Anaheim has four days off before playing their next game Friday April 10th. 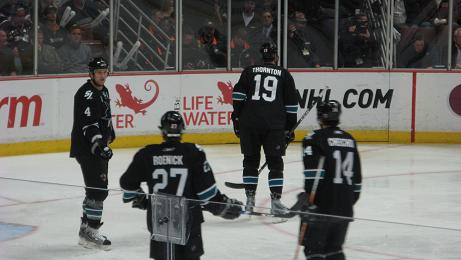 Two games left for Anaheim puts them in a close race to stay in the 2008-2009 season playoffs. More info and playoff tickets available at  http://ducks.nhl.com