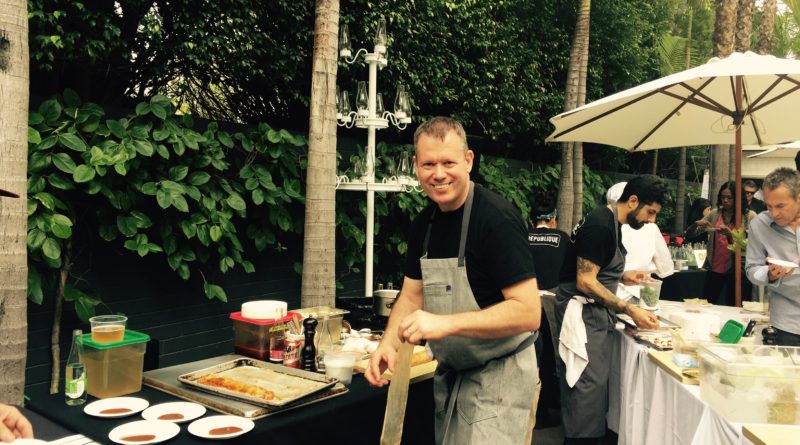 (Gerry Furth-Sides) Welcome back to the Viceroy Hotel on March 12, “Cochon 555,” the ambitious and most talked about culinary competition and fundraiser starring “5 chefs, 5 pigs, 5 winemakers” in a national ten-city North American tour (http://cochon555.com).

Watch a sample of the excitement here (http://cochon555.com/2017-tour/losangeles/)

The one-of-a-kind stand-up tasting reception features five local celebrity chefs cooking five heritage breed pigs in a fierce but friendly competition for the Piggy Bank cause.(see below) Guests vote for the best bite of the day and the winner goes on to the nationals. 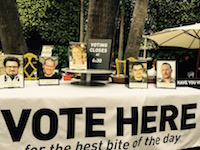 The buzz was electrifying.  Guests surrounding me gleefully followed the instructions “to enjoy,” compared notes and shared dishes, even if only for the  few minute respite in between the 100 bites.  We seemed to be happily following a recent Whole Food sign blessing this endeavor.  It read, “EAT GOOD FATS.”  And, after all, we were burning calories by standing and walking the whole party.

What is so special about the event is that it is themed, and that top chefs in the city have fun but take seriously the  competition and go all-out with an glorious variety of dishes.  The pig-loving crowd feels like a bunch of 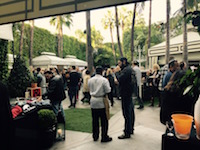 conspirators out to have a blast with the absolutely top-notch versions of their favorite animal, THE PIG.   And it brought together esteemed chefs and their friends.  Below is Chef Nick Shipp and his wife, and Brooke Williamson and her husband.  Nick’s email is” “bacon-wrapped chef.”   Chef Nick was at the event to cheer on his good friend, Bruce Kalman. 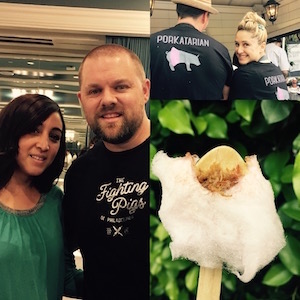 Personable returning champion Chef Walter Manzke of Republique was crowned the Prince of Porc. Chef Walter will go on to represent Los Angeles against the other nine cities’ winners in Grand Cochon at Snowmass / Aspen for the title of 2016 King or Queen of Porc and the grand prize, a four-day wine experience in Rioja, Spain’s most prominent wine region. 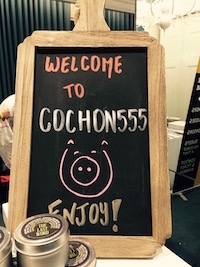 Republique Restaurant’s Chef Walter Manzke,  with his pastry chef wife and little boy Nico to help him at the tables, retained his local  title. 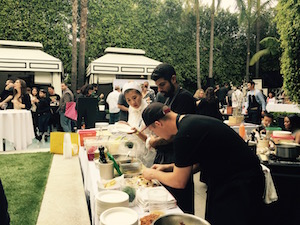 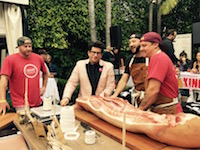 So, true to its billing, the seven-year-old flagship tour, touting itself as “the world’s first environmentally conscious nose-to-tail pig competition celebrating fine-dining,” lived up to its word.

Although 36 dishes definitely provided enough food to go around for two entire days (I found containers in my purse today from chefs who lovingly offered dishes at the end of the afternoon), this event presented a varied, gourmet introduction to heritage pork dishes.

The five chefs prepared a maximum of six dishes from one whole hog each in a competition for hungry gourmands (the right term) and celebrated judges. Competing chefs include Brooke Williamson of Playa Provision, Jason Neroni of Rose Cafe, Bruce Kalman of Union, Carlos Salgado of Taco Maria, and returning champion Walter Manzke of Republique.

The stage was set at the Viceroy near the beach.    Fancy white covered food booths resembling cabanas were scattered about the area with an inviting sign to “Meet the CHEFS & their PIGS.”  Chef Brooke Williamson’s beautiful smiling face was nearest.  She was working with RED WATTLE pork from Rainbow Ranch, originating in New Caledonia, a French Island in the South Pacific.  Sliders had a hearty but tender, almost beefy taste for which they are known I later read. At this hungry beginning, the guest next to me asked if the bacon decoration was edible (top right corner of lower right image)!   Brooke’s cotton candy on a stick with a shredded pork filling happily ended the menu. 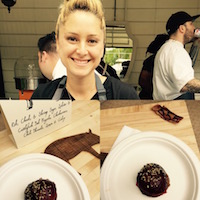 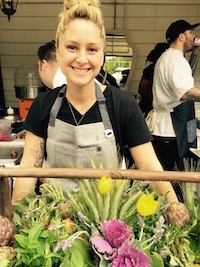 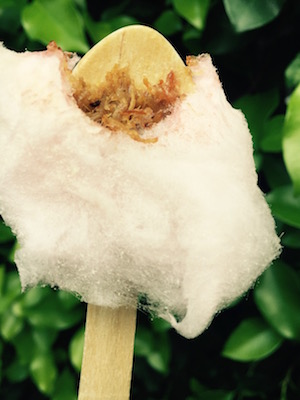 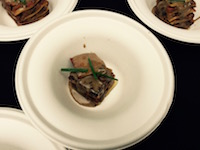 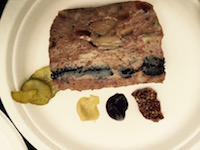 The bold middle dish below is roasted pork meatballs with smoked burrata, chicharrones, tomato marmalade.  Always serious, Neroni barely had a second to look up. 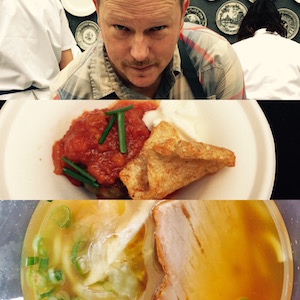 Across the way, popular Bruce Kalman from Union Restaurant was having a good time. 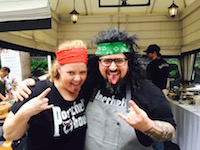 Returning champion, Republique’s Walter Manzke’s staff spread out over six working tables, with dishes that could not seem to be replenished fast enough.  Chef has plenty of help from his talented pastry chef wife, Margarita and four-year-old son, Nico. 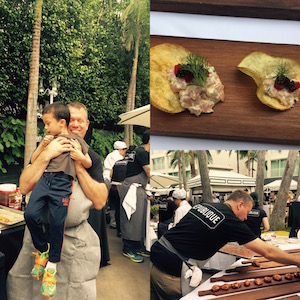 Pork Tartare with Black River Caviar on a potato chip; a Cuban Sandwich with braised Pork, Cured ham, Mojo and Dijon, and a Pork “Torte Gibier” with Blood Sauce (shown above). 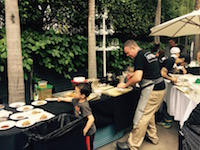 Chef Walter, The winning “Prince of Porc,”  of the regional event goes on to compete for the national title of “King or Queen of Porc” at Grand Cochon, the tour finale, held at the Viceroy in Snowmass / Aspen on June 18th. 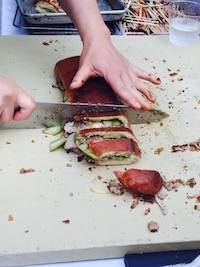 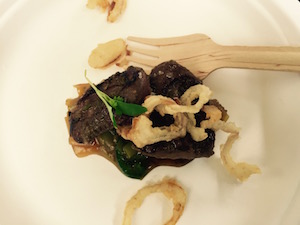 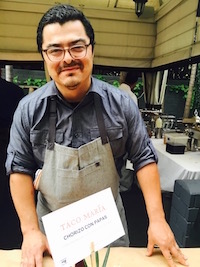 Voters were handed a PIGGY button and a ticket to vote at a table with the chef’s photos.

One of the most fun parts of the event was the “auction” with packages to-go of heritage breed pork at the Pop-Up Butcher Shop, a retail fundraiser for Piggy Bank with the support of Williams-Sonoma and Hedley & Bennett. 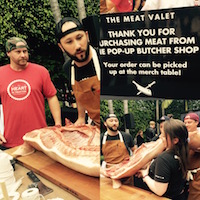 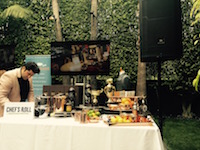 Many of the donated items were the generous gift of sponsor Williams-Sonoma.  By this time the crowd was so thick you could only hear the auctioneer add more and more to each package in the 100’s of dollars – all the money to go to donations. 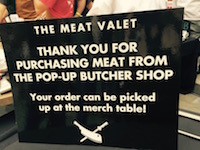 Pork was even creatively, lovingly infused into the sprits. The 1942 and the mobile Heritage Rum Cart featured Rhum Clément and Plantation Rum. Bourbon lovers were greeted with the “Perfect Manhattan” featuring Eagle Rare and Buffalo Trace finished with Luxardo cherries.  A Smoked Old Fashioned featured Breckenridge Bourbon with the support of Pierre Ferrand Dry Curacao.

“I’m excited about all the new partners  who support family farming and independent business,” reported founder Brady Lowe.  “The Cochon555 Tour is now a movement, from hosting celebrated culinary events and dinners all over North America to reaching a global audience with the news of the first open-source agricultural model. The tour is dedicated to helping family farmers succeed, period,” he added.  “Together, with some of the best chefs and partners in hospitality, we amplify the conservation of heritage pork once again, which for many is a ‘gateway’ to a larger appreciation of where our food comes from and the people that raise it, leading to more mindful eating and safer food choices for our youth. Piggy Bank, a 501(c)(3) project of the Giving Back Fund.”

The weekend began with a pair of guest chef dinners to benefit Piggy Bank, with 100 percent of the proceeds going to the cause.  The dinners bring together high-respected chefs, world-renowned winemakers and beverage experts to create a multi-course, interactive dining experience where guests have the opportunity to interact with the participating chefs.    The series is connected to Cochon555’s annual rewards program which encompasses over 100+ restaurants participating nationwide. 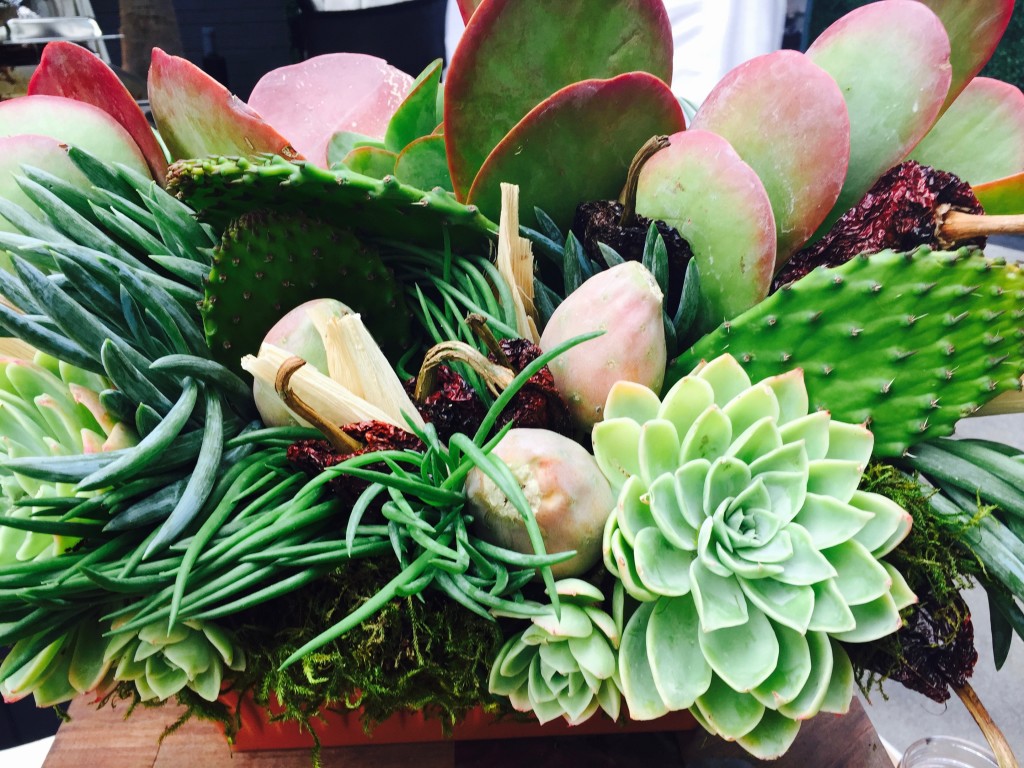 Founder Brady Lowe has a long-term commitment to making Piggy Bank the charity recipient of the tour moving forward. The Cochon555 tour sources 275 donors each year in addition to hosting dinners and other activities. Piggy Bank seeks to build a future for family farming with the goal of changing the future of food and promoting long-term farming sustainability.

And the next day for breakfast, the barista created a final tribute: 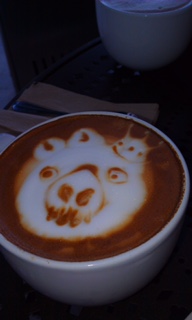