If your planning a trip to France I highly recommend you spend a day or two in beautiful seaside Normandy and  join OverlordTour for a guided tour of the World War 2 D-day landing sites. I have always been fascinated with massive D-Day landing on June 6, 1944, where 135,000 men hit the beaches, over 5,000 ships as far as the eye could see were on the morning horizon. Overlord was the code word used by the allies for the D-Day mission. I booked the half day tour with OverlordTour well in advance and you should as well. These are small intimate tours and they book up fast. So after a few wonderful days in Paris I boarded the morning train for Bayeux. The two and a half hour ride was very comfortable and scenic. I met up with our guide and the other guests at our luxury air conditioned minivan in the Bayeux town center at 145 PM for our 4 hour guided tour. There were seven of us in total as we departed to step back in history. Bayeux has a stunning cathedral church that is 30 years shy of its 1000 year old birthday. We learned from our guide that the German soldiers retreated in the evening of June 6th after the landing and the Mayor of Bayeux raced by bicycle at dawn to reach the allied troops to let them know the town was clear so they wouldn’t bomb Bayeux, Thus saving this ancient church. Our guide pointed out all the church towers in the area were destroyed because it was a favorite hiding spot for German snipers. 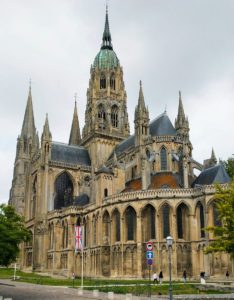 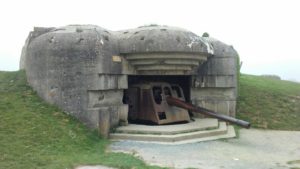 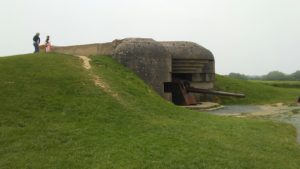 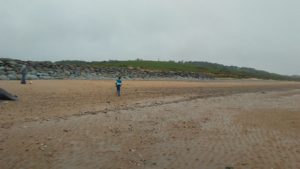 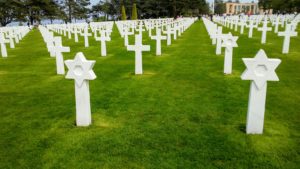 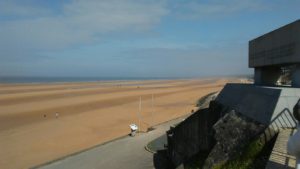 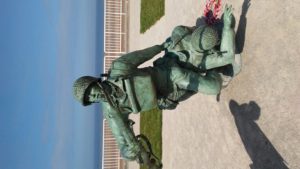 Our first stop was to see the well preserved German Batteries and huge guns at Longues Sur Mer (Sur Mer means by the sea.) Set well back from the cliff line these 4 fortified battery of imposing guns spread across a few hundred yards each contained large 152 mm canons that were to fire on the ships at sea. But when the attack started our airplane bombs damaged the underground phone lines from the coastal lookout posts so these huge German guns were firing blind and caused little if any damage to the 5,000 ships out at sea. It feels like a real step back into time to walk through these thick fortified cement bunkers and to feel these huge canon like guns still standing from this battle 60 years ago. D-Day invasion launched the largest sea armada in the history of the world. And 20,000 vehicles would soon after land on these five beaches.
Next we drove a short way to Omaha Beach where 1,500 American soldiers lost their lives on June 6th, it will forever be known as “Bloody Omaha.” The beach is vast, wide and very peaceful today. A little boy and his dad were playing soccer on this sunny May day. A far cry from when the beach was filled with German explosive obstacles and several machine guns fired crisscrossing the beach along with two huge 88 guns firing from each beach-end that blew men apart and cut them to shreds. For many years I wondered what it would be like to visit this beach and it was quite moving to stand there. So many young men lost their lives here to save the world from Nazi domination. The French people in the Normandy area still have a special friendship and warmth for America, England and Canada because our boys gave their lives to liberate France. Our guide pointed out many flags from the 3 countries fly from homes here in Normandy as tribute.
The next stop on the tour was the famous American Cemetery of Colleville Sur Mer. Here 9387 servicemen and woman are buried, Including all the men who died on Omaha Beach and in the nearby fighting across the farms and hedgerows over that June. Our guide pointed out several of the famous hedgerows where German machine guns hid and cut down many a dozen soldiers coming up a country road in a matter of seconds. Three soldiers who earned the Medal Of Honor for their bravery on D-Day are buried here. You will recognize this beautifully peaceful cemetery set on the cliff above the beaches if you have seen the film Saving Private Ryan. The thousands of white crosses set against the bright green grass is as dramatic in person as it looks on TV. There are over 370 Jewish Star headstones, but our guide said there are many more Jewish soldiers buried here who were advised to loose their dog tags before battle in case the Germans captured them, others who were so blown apart they couldn’t be identified, all were buried under Christian crosses. President Theodore Roosevelt’s oldest son Theodore Jr. was a 56 year old General who against the protest of upper brass who did not want Generals in the first wave of the landings. Teddy insisted on going knowing his green troops with no fighting experience would need him, landed on Utah Beach with a limp and a cane on D -Day and won the Medal Of Honor for leading his men off the beach. A month later while still in France with his men he died of a heart attack in his sleep. When he was buried here his famous family asked that his beloved brother Quinton a pilot that flew in WW1 and died flying in France be buried next to his older brother. So Quinton Roosevelt is the only soldier who did not fight in WW2 buried in this cemetery.

The last stop on the tour was Pointe Du Hoc, a hundred foot cliff separating Omaha Beach from Utah Beach. Allied recon photos showed huge guns up on the cliff and it was the job of the 2nd Rangers Battalion to scale these cliffs and destroy these guns. This mission seemed like pure suicide since the German soldiers would fire down and pick the men off easily. Yet under LTC James E Rudder the Rangers won the day and scaled the cliffs in a matter of minutes. They had trained and practiced for months in England and the men were trained to exhaustion by their commander. But they were now as fit as the best pro athletes of today and their mental and physical extreme training let them to this great accomplishment. But when they took the point they found that the guns weren’t there, only wood telephone lines painted to look like the huge guns. commander Rudder was convinced the guns were hidden nearby and would still be used to fire down on the soldiers on the beaches, so he sent his men out in small groups looking for the guns. Three of his men found the guns hidden and ready to fire on the men landing on Utah Beach, the Germans guarding the guns were waiting for the signal to fire them and were caught unaware as the Rangers slipped phosphorus grenades into the guns damaging them badly and rendering them unable to fire. Thus saving many lives of American soldiers coming ashore on Utah Beach that bloody morning. All around Point Du Hoc are huge craters sloping 20 feet deep in the grass from the airplane bombs in the weeks before the attack. The Germans moved the huge guns because of these air bombings which clearly didn’t hit the guns but came very close. You can walk down into these grassy steep craters and several from our group did. There is also a fortified lookout cement bunker, It was from here that June 6th dawn that the first German soldier on lookout was horrified to see thousands of Allied ships on the horizon heading his way. Our guide reminded us that the famous 1962 epic star studded Hollywood movie The Longest Day actually used this lookout bunker to recreate the moment the soldier saw the armada of approaching ships.

Overlordtours offers full day tours, two day tours and personalized tours as well. I would love to go back and do their tour that includes Sainte Mere Eglise where the US Paratroopers landed in the evening of June 5th, as seen in the award winning HBO series Band Of Brothers. So go to Overlordtours.com and book a wonderful historic tour that fits your curiosity, you won’t be disappointed.
If you have the time stay a night or two in Bayeux. I enjoyed the towns outdoor cafes and I spent the night in a nearby Chateau from the 1800’s, and the dinner here was excellent. Booking.com is a great way to find good priced lodging in all of France. All the surrounding Chateau’s here in Bayeux were taken over during the war by German officers. So I slept in a bedroom that the enemy slept in for 4 years, which I thought about as I laid my head on the pillow that night. It was a wonderful tour and very moving experience.
Our publication has been in business since 1999. We cover many topics with positive publicity and aim to provide features on all of our stories with contact info and direct website links. Our articles stay up forever and we can put up advance pr as well. We focus on travel, food, lodging, sports, entertainment, health, product reviews and more. A full list of our topics can be found on our home page.