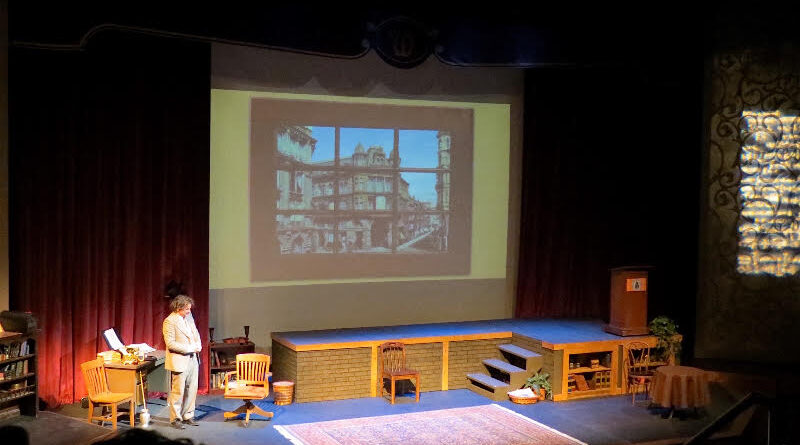 Jack Fry plays Einstein-  See below for dates and tickets to this interesting and educational play. EINSTEIN! ~ Celebrating 100 Years of General Relativity.

With 16 consecutive sold out performances and a handful of seats away from the 17th, EINSTEIN! ~ Celebrating 100 Years of General Relativity seems to be the sure thing staple at the Santa Monica Playhouse since 2015.

This is not a Mark Twain, read passages of my books kind of show.  Jack Fry’s EINSTEIN! is a roller coaster ride giving audiences a younger, “pre-crazy” haired Einstein as he struggles to prove his theory of General Relativity despite grand odds.

It’s based on his life in 1914 with Berlin, the epicenter of World War 1, as the backdrop.  So city and country is literally tearing itself apart while Einstein is, as well, deconstructing.  Meanwhile, the scientific establishment doesn’t understand this new theory even though a sector of it, namely David Hilbert, tries to beat Einstein in solving the Relativity riddle.

Despite other obstacles, Albert is also battling a wife who won’t give him a divorce and a son who is fighting for his affections, not withstanding the bad luck in what Albert translates into acts of God’s hiding his secrets for as long as possible.

What makes this historic solo drama different than most is that Fry wonderfully solicits the audience’s imagination as he becomes other characters that help him tell this moving story. So it is plot oriented, based on Einstein’s life from 1914-1922.  Years not much known about his life until 2007, when Hebrew University did its penultimate release of thousands of documents shedding light on Einstein’s early life in Berlin.  Until then, it remained much a mystery.

Both dramatic and funny, this show is worth both your time and your space.