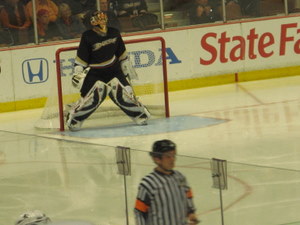 I found it quite amusing and ludicrous when I heard ex player and current development coach Mike Ricci of the Sharks rash out with obscenities and profanity in the pressroom during game 4.  Ricci, a good player in his time but known for cheap shots and scrappy play that involved fights and penalties was yelling at the refs for not calling a penalty as period one ended.  I guess he wasn’t watching the full series as the Sharks ended up with a huge advantage of almost 3-1 in penalty calls during the series despite the Ducks being the 6th best team in the NHL this year to avoid penalties.  We must have been watching a different series. Yet it was the Ducks who prevailed killing off so many penalties and capitalizing on some key Shark penalties to upset the #1 seed.  The Ducks came in as the #8 seed and had to make an incredible late run at the end of the season just to make the playoffs.  Some key moves, transactions, players returning from injury, team chemistry, confidence, a #1 scoring machine line and a hot goaltender in Jonas Hillar did it in for San Jose. 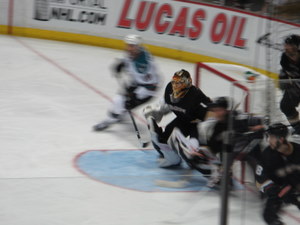 After the Ducks won the first 2 games in San Jose, they returned home in front of a frenzy crowd in Anaheim.  Despite getting the worst of the calls, the Ducks kept the game close until one last penalty in the third helped the Sharks score the go ahead goal and win Game 3.  The Ducks tied the game three times before losing on a
power play goal to the San Jose Sharks in the third period.
Rob Blake had the game winning one-timing assist to Patrick
Marleau past the glove of Hiller. The first period was highlighted by a George Parros vs.
Douglas Murray fight, including many hard hits and 28 shots on goal.
The first period ended in a 2-2 tie. San Jose scored first off of a kicked in Drew Miller skate after Hiller saved Rob Blake’s slap shot from the point.
The Ducks also scored on a kicked in puck from Sharks goalie Evgeni Nabokov
after a Bobby Ryan shot.  Joe Thornton made a great pass across the slot to Dan Boyle
who slipped it past Hiller’s leg-pad giving the Sharks a
2-1 advantage before James Wisniewski scored on a slap shot from the
top of the circle tying the game at 2-2. 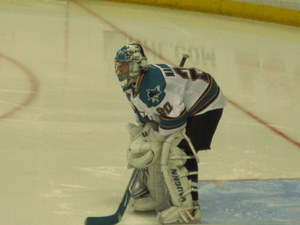 The second period started quickly for the Sharks with Boyle
scoring again on a deflected shot off of Hiller early in the period.
Chris Pronger evened the score on a blazing slap shot
to tie the game at 3 in the second period.
The Ducks could not pull it off even with Hiller out of net
90 seconds left in the third, losing to the Sharks 4-3.
This was all in all a very exciting game, with both sides
hustling and the visitors barely pulling it out in a must game. 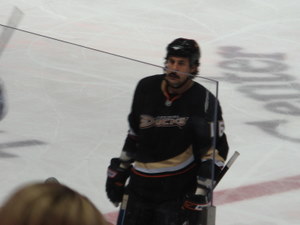 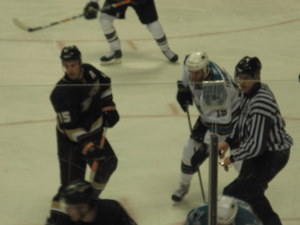 The George Parros fight was one of the exciting points in the game. For all of the die-hard ‘stache’ fans, they were able to see their hero in action. Around the Honda Center you will see a good hundred or so fans with fake mustache’s representing their hometown bruiser. Whenever the in-house camera would zoom on Parros, he would receive the largest ovation. Parros would not acknowledge the fact that they were cheering for him. The focus of these players is pretty amazing. In Anaheim, Duck girls skate past the benches without getting any attention from the players during time outs to clean the ice, which shows some great focus. 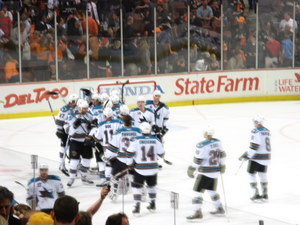 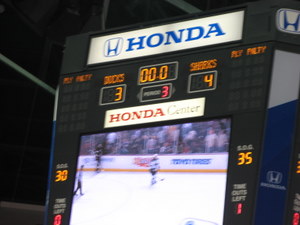 Game 4 started the same with the Ducks getting 3 early penalty calls only to kill them all off.  They truly dominated and won 4-0 to take a 3-1 series advantage.
Bobby Ryan scored two goals in the second period.
The big #1 line of Corey Perry, Ryan Getzlaf and Ryan played spectacular. Perry deflected Getzlaf’s wrist shot into the net with 5:51 left in the
third. Drew Miller scored on an empty net at 19:10, finalizing the
score at 4-0.  The game seemed close into the third period before Getzlaf intercepted Joe Thornton’s pass and shot at the net for Perry’s deflection goal.
Both teams were in playoff mode skating at full speed and giving it their all.
The sold out Honda Center in Anaheim kept a full crowd until the very end.

Bobby Ryan scored his second goal only minutes after being checked into a piece
of glass that separates the two benches. His shoulder shattered the piece of glass
and crewmembers fixed the glass and removed the broken pieces, which caused a little delay. The game was completed in less than three hours and fans were excited and talking trash to the nearby Sharks fans that made the short commute on the way out.

Game 6 was back in Anaheim after the Sharks won game 5 in overtime 3-2 on a Marleau goal and Thornton assist in a close battle. The sell out crowd was in a wild frenzy anticipating moving on to the second round. Only 2 seconds into the game, the two stars (Thornton and Getzaf) from each team decided to go at it to rile up their teammates.  Both got 5 minutes for fighting and the game was off to an intense start.  The Sharks took an early lead with a rebound goal by Milan Michalek after Rob Blake sent a shot at the net.  That was quickly erased as Perry batted in a Getzlaf shot on the power play to tie the score as the period ended 1-1.  Teemu Selanne scored his first goal of the playoffs off a rebounded Pronger shot that somehow got by Nabokov.  Only about a minute and half later, the Ducks made it 3-1 with a one time shot by defenseman Francois Beauchemin. What a huge lift to have him back as I asked some of the players after the game. Beauchemin is a solid stay at home defenseman who does the dirty work but he got his first goal since tearing his ACL knee ligament in November 08.  The only goal of the third period was a laser shot by Getzlaf past Nabokov to make it 4-1 and put the game away.  They don’t seam like a #8 seed and I wouldn’t want to play these guys right now. I talked to Hillar after the game and he told me the team is gelling right now and is full of confidence.  He mentioned everyone has worked hard to get where they are at and the results show.  He is a very modest and poised guy for being so young besides being extremely talented in goal.  He was very humble and said the Sharks were a great team but his team is hot and playing together at the right time.  I asked him about the refereeing during the series and he just said the guys have to be more disciplined especially facing the Wings next as their power play is fantastic. I tend to think the refs have it out against the Ducks for some reason without being biased.  I like to see minimal penalty calls in the playoffs to the players decide it unless it is blatant or something happens in front of the net or on a scoring rush but not a ticky tac penalty at center ice.  I know the refs are doing their best but calling it one sided for either team is not fair in the playoffs. That makes this series victory even more impressive in my mind and many other minds.

Coach Randy Carlyle was very proud of his team in the post game interviews and mentioned they will get ready for the next round now and the goal is the Stanley Cup Championship! 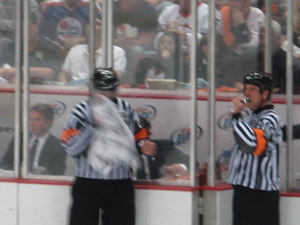 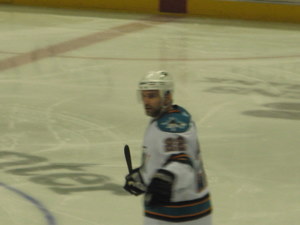 So after all the great play, the Ducks get to play the defending champion Detroit Red Wings in the only sport that gets reseeded after each round.  The Wings are a more physical team that likes to get players in front of the net so the Ducks will have their hands full.  However, Anaheim is playing fantastic in this rematch of the conference finals of 2007 when the Ducks won 4-2 on route to their first and only Stanley Cup.