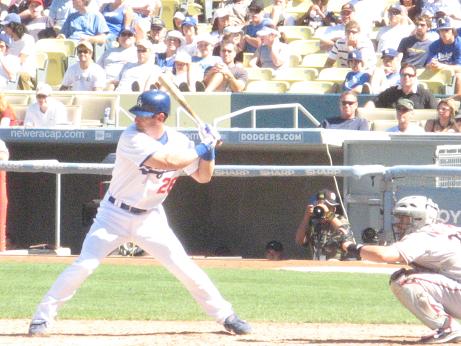 The Dodgers beat the Diamondbacks on September 15th, 6-2, to keep their playoff hopes alive.  Derek Lowe pitched very well and Luis Gonzalez (pictured below) hit at 3 run HR off Livan Hernandez in the first inning to get LA going.  Lowe had to be pushed back to this game after injuring his hand while playing catch with Jonathon Broxton earlier in the week.  Eric Byrnes was held at bay while Tony Clark homered for one of the lone highlights of the day. Both are pictured below.  The Dodgers pulled within 3 games of first place but took a big hit as they lost on Sunday’s final game of the series as their playoff hopes have diminished.