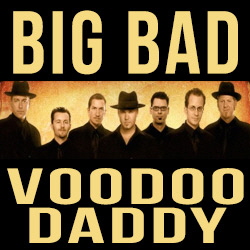 2016 marks the 24th Anniversary of Big Bad Voodoo Daddy’s remarkable arrival onto the music scene. During the band’s first years, having secured their legendary residency at The Brown Derby nightclub in Los Angeles, the reminded the world, in the middle of the grunge era, that it was still cool to swing, big band style. Big Bad Voodoo Daddy’s irresistible live show and aggressive, musically perceptive approach has proven them over time to be the singular standout among the 90’s swing revival. The high energy nine man group continues the party with their massively successful fusion of classic American sounds from jazz, swing, Dixieland, and big band music.

Under 18 Must Be Accompanied by a Paying Adult.