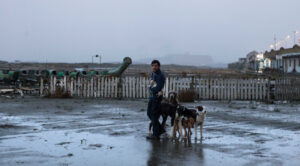 (Gerry Furth-Sides, all photos here courtesy of Magnolia Pictures)The desolate seaside village on the outskirts of an Italian city could be the final scene of Fellini’s, 8 1/2 , only in the world of Dogman as conceived byMATTEO GARRONE there is no lighthearted circus atmosphere.  The only light moments are the entrepreneurial small businessmen who gather fora meal and recount grim skirmishes with the area bully, Simoncino. Among them is Marcello, a little guy who grew up tolerating the bully.  Marcello is the kind of guy you see in your mind as tagging along with the group, even when they are all seated at table.  So it is a natural that as the mild-mannered Marcello is forced into petty burglaries by the Simoncino, to the extent that is appears he tags along without being forced, just to be one of group.  This is not to say that Simoncino is so tough that he endures a bullet being removed from his shoulder with no anesthetic at home.  The only person who towers over this thug is his mother.  When we watch this, we know he can be taken down. 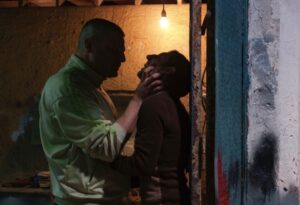 Gentle Marcello meanwhile lavishes love on his dog grooming store and his young daughter, Alida.  Judging from the blue ribbons he wins with his dog grooming and the scuba diving holidays he enjoys with Alida, he is a happy man on his own.   Marcello even has the wherewithal to go back and revive a dog after a burglary in which the gangsters stow it in a freezer. 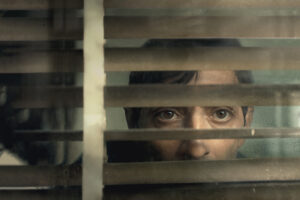 When Simoncino’s abuse finally brings Marcello to a breaking point, he decides to stand up for his own dignity through an act of vengeance, with unintended consequences.  The excellent cast contributes to making Dogman raw, real and with a resonating effect on any viewer.  All of the crew contribute to its success.   The screenplay is by Ugo Chiti, Maurizio Braucci, Matteo Garrone, Massimo Gaudioso.   Paolo Del Brocco, Matteo Garrone, Lean Labadie and Jeremy Thomas produced the film.

Dogman was an official section of the 2018 Cannes Film Festival – World Premiere (Winner: Best Actor – Marcello Fonte) and the 2018 Toronto International Film Festival.  It was nominated as best foreign film in the 2019 Oscars.  It was showcased at Italian Cinema Style 2018, where we were honored to attend a dinner prepared by One-Michelin star chefs flown to Beverly Hills for the event at which the star appeared after a screening.  http://(https://localfoodeater.com/tag/dogman-film/.

“As often happens in my films, at the beginning of Dogman, there’s a visual suggestion, an image, an inversion of perspective: that of some dogs, locked inside cages, that act as witnesses to the explosion of human brutality… an image that goes back to ten years ago, when, for the first time, I thought about making this film… But over time, Dogman changed along with me, becoming a film that was always new, always different. Some of the original ideas made it to the end, but they don’t exhaust, for me, the more profound meaning of the story that I wanted to tell.  Dogman, for example, is not simply a film about vengeance, even if vengeance (or better yet, redemption) plays an important role, just as it’s also not solely a variation on the (eternal) theme of the struggle between weak and strong.

Instead, it’s a film that, despite having an “extreme” story, puts forward something that concerns all of us: the consequences of the daily choices we make in order to survive, of the yesses that we say which bring us to no longer being able to say no, to the difference between who we are and who we believe we are. Through this examination of the profound, by bringing us up close to a man’s loss of innocence, I think the film is universal, “ethical” but not moralistic: because of this, it’s important for me to underline the distance the film has from the news story that liberally inspired it. Everything, starting from the locations, the characters, their psychologies, has been transfigured.

One last note, to underline the importance of the encounter with the lead actor, Marcello Fonte. His sweetness and his antique face, that seems to come from an Italy that is disappearing, contributed decisively to my own understanding of how to approach such dark material, that for years had attracted and repulsed me at the same time, and the character whose story I wanted to tell: a man who, while seeking redemption after a life of humiliation, fools himself into believing that he has liberated not only himself, but his whole neighborhood, and maybe even the world. Which instead remains always the same, and almost indifferent.

Born in Rome in 1968, Matteo Garrone graduated from high school in 1986. After working as an assistant cameraman, he decided to dedicate himself full-time to painting.  In 1996, he won the Sacher Festival with the short film, Silhouette.  The following year, he created his own production company, Archimede, and directed his first feature film, Terra di mezzo, which won the Special Jury Prize and the Cipputi Award at the Torino International Festival of Young Cinema.

In 2002, he participated in the Directors’ Fortnight at the 55th Cannes Film Festival with L’imbalsamatore(The Embalmer). The film won the David di Donatello (Italian Academy Award) for best screenplay and best supporting actor, the Nastro d’Argento (Blue Ribbon) and the “Ciak d’oro” for best editing, the Fellini Award for Best Producer, Best Production Design, Best Cinematography, Best Screenplay, and Best Distribution, as well as the Special Jury Prize at the Pasolini Awards.

In 2004, his film Primo amore(First Love) was selected for Official Competition at the 54th Berlin International Film Festival. The film was awarded the Silver Berlin Bear for best film score, for which it also received the David di Donatello and Nastro d’argento.

In 2008, Garrone competed for the first time in the Official Competition at the Cannes Film Festival with Gomorra, which was awarded the Grand Jury Prize. The film won five European Film Awards, including Best Film, Best Director, Best Actor, Best Screenplay, and Best Cinematography, seven David di Donatellos, two Nastro d’argentos, the Silver Hugo for Best Screenplay at the Chicago Film Festival, and was nominated for Best Foreign Film at the Golden Globes, the BAFTAs and the Césars.

In 2012 and 2015, he returned to the Official Competition at the Cannes Film Festival with, respectively, Reality(for which he won a second Grand Jury Prize, in addition to three David di Donatellos and three Nastro d’argentos), and Il Racconto dei Racconti(Tale of Tales), winner of 7 David di Donatellos.