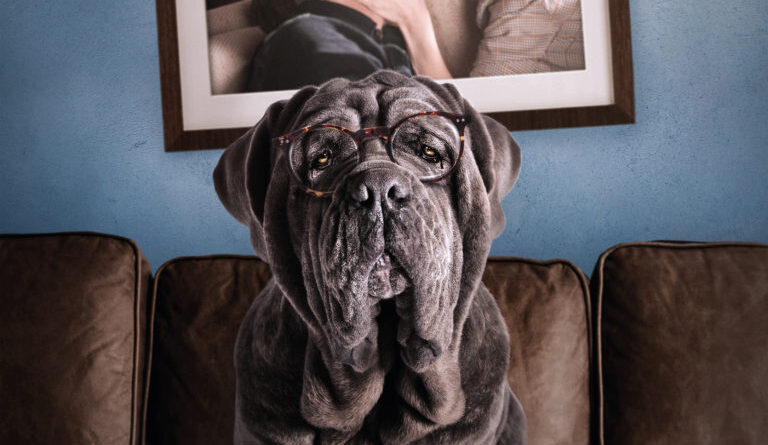 (Gerry Furth-Sides)  The title of Actor-director Yvan Attal’s (‘Le Brio’) film,  My Dog Stupid is probably the  most stupid thing in the film, and you cannot blame Attal.  It is author John Fante’s title of the book that was the filmmaker’s inspiration.  It unfortunately also sums up the main character’s attitude toward life in general at the beginning of a low-key film, compelling enough to make you keep watching and then really happy you did.

Henri, a hack screen writer goes through the motions of writing to keep up his family’s luxury lifestyle after earning literary fame decades earlier.  He share his mostly glass and wood organic  Biarritz dream house on the beach with  wife (both on screen and off), co-star, Charlotte Gainsbourg and three children – plus their assortment of friends.   Not only is the couple in crisis in this French-language adaptation of John Fante’s novella, but so is the entire family.

Henri is a middle-aged writer with fading inspiration. Feeling increasingly misunderstood by his family, he dreams of running away to start over again, preferable to Rome and preferably in his beloved Porsche.  His discovery of a slobbery dog with slovenly manners on his estate grounds that he spontaneously adopts,  motivates him to dig in his heels and start rebelling against his family. For the most part it does not look for Henri that love will stand the test of time as each family member moves out one at a time, including his wife.  Iconic real-life couple Charlotte Gainsbourg and Yvan Attal are masters at making this seem real and we already researched where we could find their earlier films as husband and wife.

What also kept me attentive was the film’s origin in a novella by In March 2006, Paramount Pictures released Ask the Dust, directed by Robert Towne and starring Colin Farrell, Salma Hayek and Donald Sutherland.  It owns a (small) cult following, but an intense one. A cousin suggested I watch it because we both are interested in LA history.  When I ordered the book from the library after watching it, the usually blasé library attendant practically jumped over the counter to hug me he was so excited.
Screening notes did a thorough job of telling how the book came to be the film. West of Rome (Mon Chien Stupide) is a book written by John Fante, published in 1985, it has been translated into French in 1987.

John Fante, is the son of Italian immigrants, born in 1909 in Denver, Colorado, he was of modest origin and wrote his first scales at a very young age. He showed his texts to H. L. Mencken, who bought his first short story for the American Mercury, the prestigious magazine he edited, in 1932. Then started a letter-writing friendship between the two men that lasted more than twenty years. While waiting for his first novel, The Road to Los Angeles finished in 1933 to be published, Fante made his debut in Hollywood studios where, from 1935 to 1966, he participated in the scripts writing for about ten films that allowed him to live comfortably.

An autobiographical novelist, Fante has only ever told one story in his novels, his own. That of a second-generation immigrant, from his father, mother, brothers and sisters and their talkative and Catholic neighbors, also Italians. He also tells of his vagrancy in Hollywood, the easy money in which one drowns, and then the choice of poverty which is that of writing.

The trailer is here: https://www.youtube.com/watch?v=JDAqNdWLTwk&feature=emb_logo
Synchronisty:  It feels at times as though I spend more time looking for something to watch, as watching films these days.
Nevertheless, at about the same time I watched the French Mon Chien Stupid, I came across the Spanish The Distinguished Citizen, with Oscar Martinez that has almost the exact same plot.  I recommend both, which would make a terrific double bill
Our publication has been in business since 1999. We cover many topics with positive publicity and aim to provide features on all of our stories with contact info and direct website links. Our articles stay up forever and we can put up advance pr as well. We focus on travel, food, lodging, sports, entertainment, health, product reviews and more. A full list of our topics can be found on our home page.